Your cart is empty.

WANT TO BECOME A MEMBER IN JANUARY? Save Your Spot Now By Filling The Intake Form And We'll Be In Touch

40 percent of All Cancers Are Preventable. Here is What the Latest Study from the American Society for Cancer Research Reveals.

Mortality rates from cancer in the US more than doubled from 1930 to 1991, reaching an all-time peak of 215 deaths per 100,000 population. It wasn’t until 2006 that improvements in diagnosis, therapy, and prevention have finally started to pay off and the number of cancer deaths in the United States fell for the first time in over 75 years.

The successful strategy of Public Service Announcements: the Case of Tobacco

In 1971, President Nixon declared a “war on cancer” - specifically using Public Service Announcements (PSAs) to combat the increase in cancer mortality rates due to smoking (graph below).

Cigarette consumption in the U.S. more than doubled between 1930 and the early 1970s. In a 2006 analysis, researchers concluded that without reduction in smoking "there would have been virtually no reduction in overall cancer mortality in either men or women since the early 1990s". In this case, public awareness acted on clear findings by clinical research and spread a message that was accurate, effictive, and multi-generational.

As the below chart from the American Cancer Society shows, the prevalence of lung cancer in Americans decreased as a result of a decrease in the number of smoking adults. 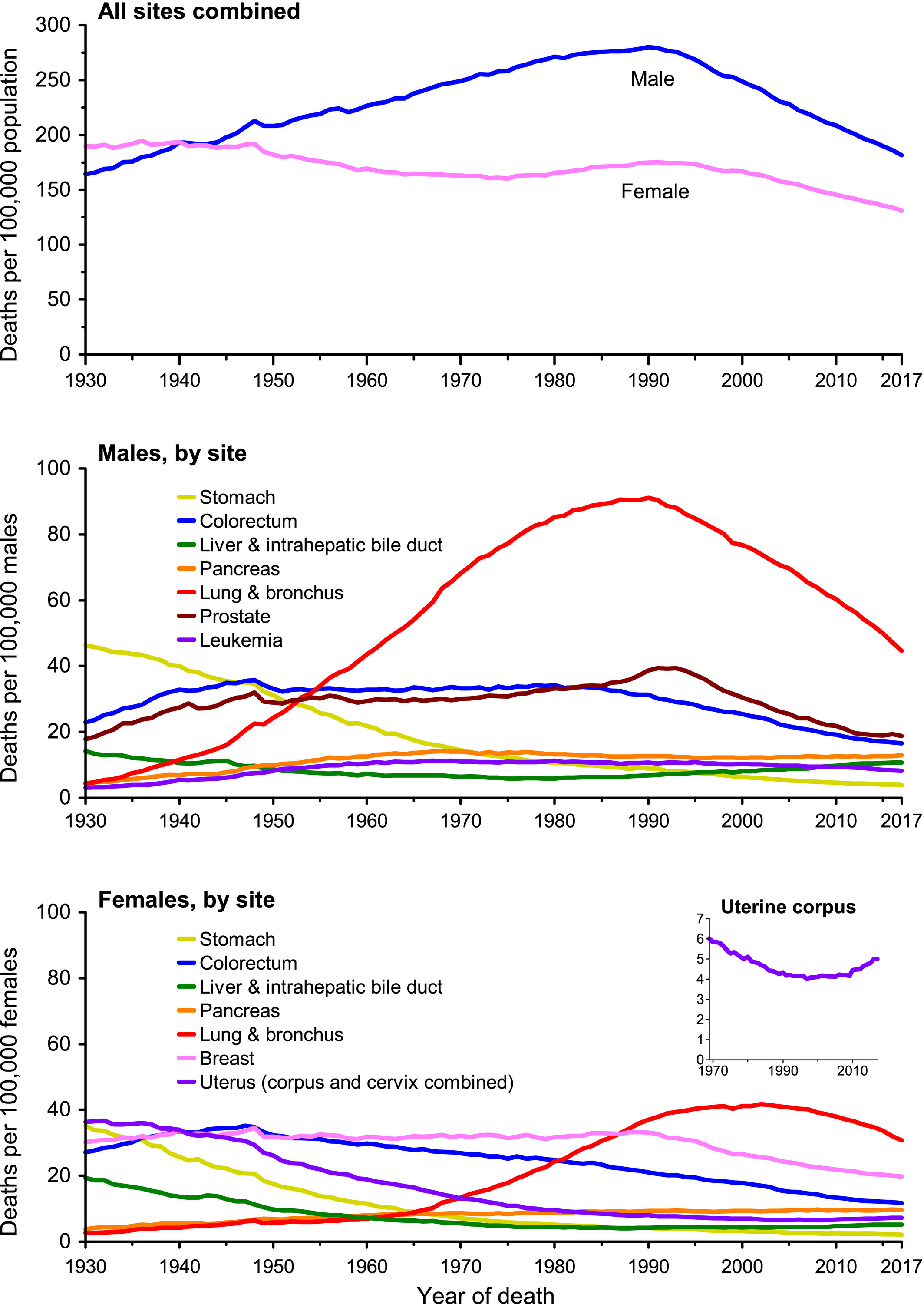 Smoking is not the only lifestyle choice linked to cancer. In fact, it’s not even the most pervasive.

Although smoking contributes to about 22 percent of cancer deaths in the United States, but over 50 percent of all cancer deaths are linked to preventable lifestyle risk factors. Tobacco, alcohol, excess weight, and lack of exercise make up the four most influential, modifiable behaviors that lead to cancer. 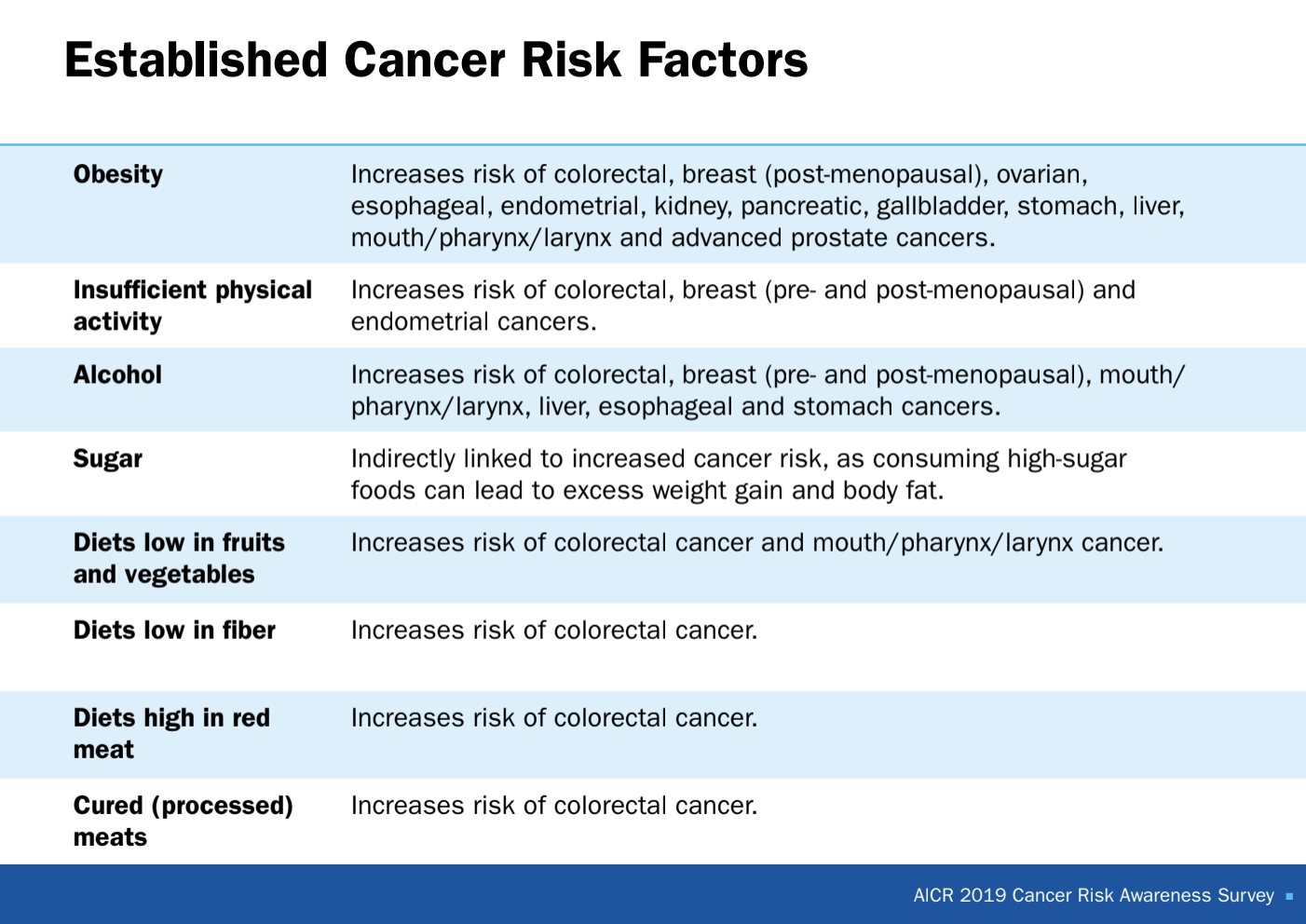 Research shows prevention through lifestyle is the most effective method.

The Link Between Cancer and Food: What Science Tells Us

Experts have warned about the potential dangers of processed and red meat, sugar, alcohol and excess weight for their link to cancer risk, particularly for colorectal, breast and other cancers. On the other hand, good-for-you foods like fruits, veggies and whole grains have been shown to decrease cancer risk.

Nowhere is this more evident than on page 13 of the 2018 Continuous Update Project report from the World Cancer Research Fund and the American Institute for Cancer Research. A graph displays a matrix of red and green boxes to show certain foods’ relationship to risks of cancer and excessive weight. Green and teal boxes indicated foods that in some way lower those risks, while red and orange ones represent the opposite.

Apart from the fact that healthy foods can prevent excessive weight gain (itself a risk factor for cancer), some research has discovered chemical processes at play. For example, some substances in cooked red and processed meats may be linked to carcinogenic agents. One study found that eating a 50-gram daily serving of processed meat (like hot dogs or ham) raised the risk of colorectal cancer by about 18 percent. 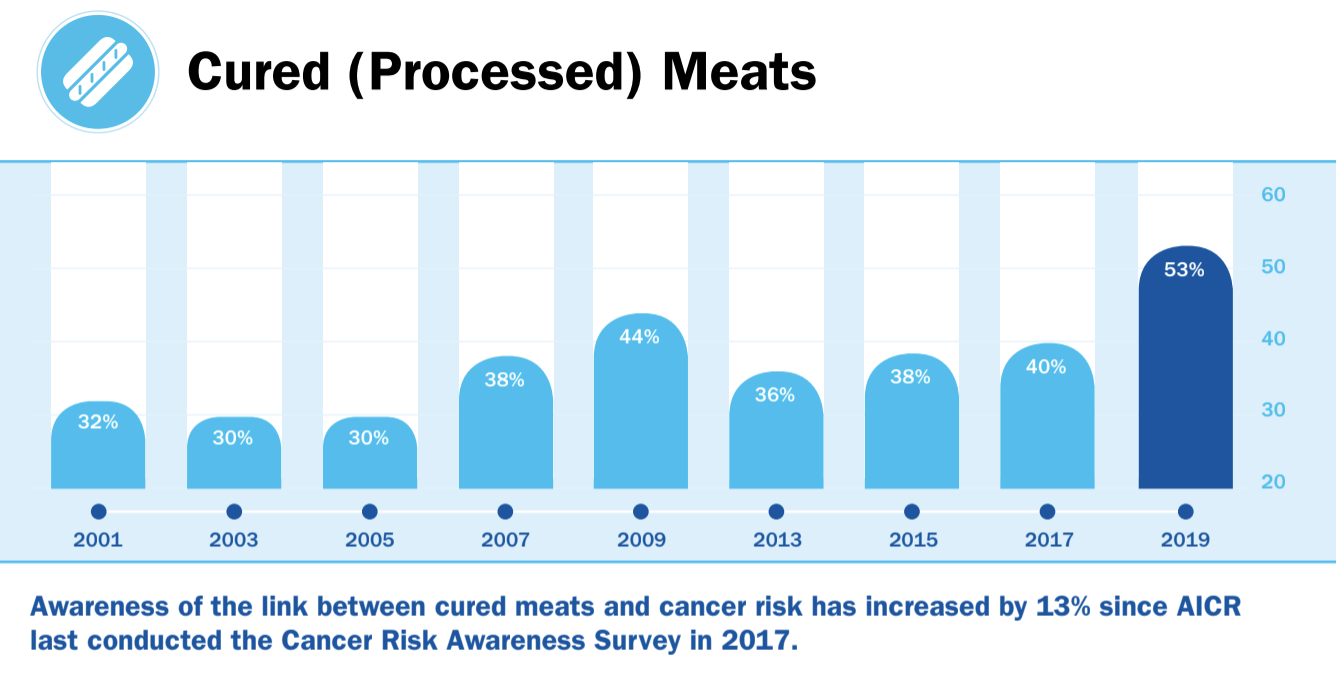 In contrast, plant-based foods contain disease-preventing components—from antioxidants and anti-inflammatory properties to fiber (which also lowers cancer risk). There’s also promising research related to the gut microbiome, probiotics and cancer development—especially when you consider that a single apple has about 100 million bacteria.

As a result, a growing body of health experts now promote plant-based diets to reduce disease risk for cancer and other chronic conditions. Add to that the fact that you can still get enough protein, zinc, vitamin B12 nutrients and iron from meat-free sources, and it’s clear why. The Physicians Committee for Responsible Medicine recommended in 2018 sticking to a plant-based diet only (and avoiding all meat and dairy) for the greatest cancer risk reduction.

Education is the Tipping Point For Risk Reduction and Prevention

Still, dietary habits have gotten progressively worse, despite warnings from health groups. According to the AICR, awareness of the link between diets low in vegetables and fruits and increased cancer risk remains low. In 2019, it ties for the lowest in nearly twenty years. 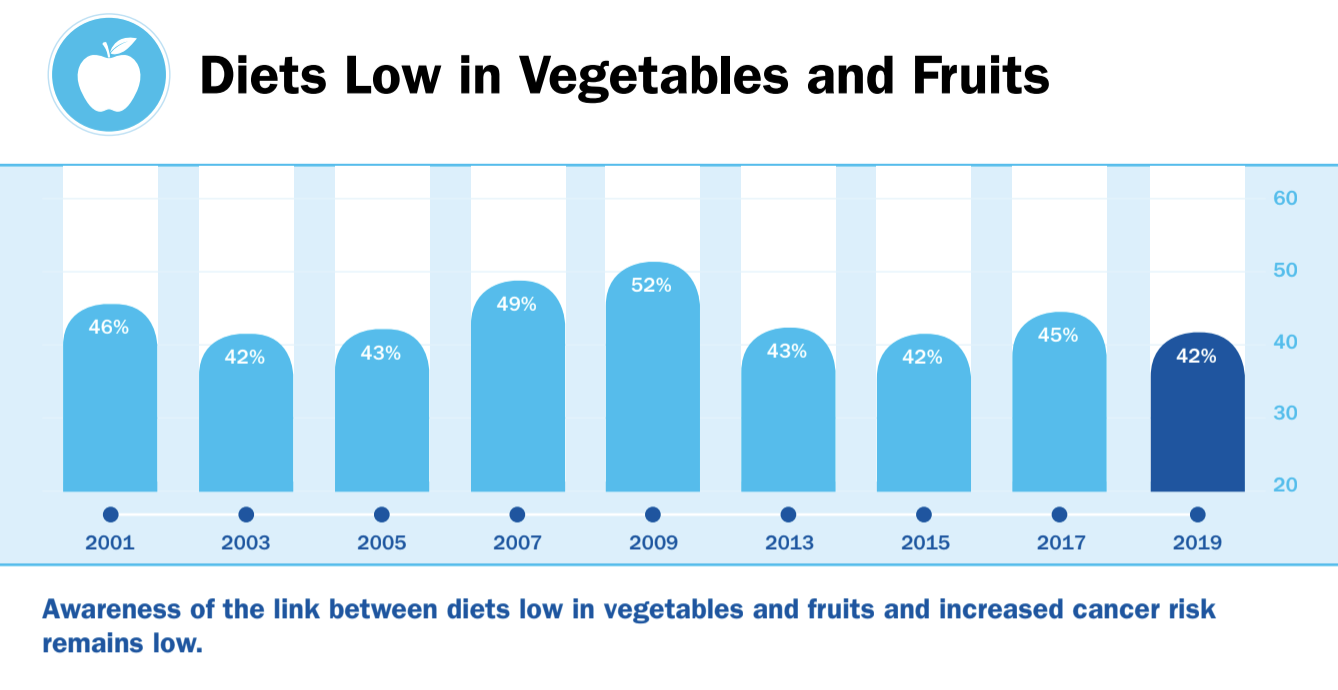 Some people may try healthier meals once in a while, but overall, the message hasn’t stuck—and science still fails to combat sentiment.

Take this comparison, for example: Just under 14 percent of American adults smoke (which raises cancer risk), yet 71 percent of them are overweight (which also raises cancer risk). Americans acknowledge the former risk, but not the latter one. It begs the question, why have smoking rates improved, but diets haven’t?

One reason for the prevailing dogma has to do with what is taught in schools. In American classrooms it is still very common to be educated about the risks of cigarettes through textbook images of black lungs and documentaries filled with messaging that smoking causes cancer. Surgeon General Warnings and FDA health warning notices cover carton packaging.

Nutrition has not yet gotten the same, critical attention for its role in cancer prevention.

Here’s Some Food for Thought

Every American should understand the consequences of poor nutrition and lifestyle choices— not just because of its impact on cancer risk or other chronic conditions like diabetes or heart disease.

Taking the cigarette smoking example, we should know it as well as we know smoking greatly increases risk for lung and other cancers. There should be classes taught in elementary school and Surgeon General Warnings or FDA health warnings on food labels about the cancer causing effects of poor nutrition.

Right now, the U.S. spends far more per head on health care, including cancer care, than any other country, yet higher expenditures have not led to longer lives. The opposite in fact. Europe spends much less on cancer care than the U.S. and has lower cancer mortality rates, according to a 2015 study. This holds true for Mexico, Italy and Brazil, according to Our World in Data.

We know proven prevention through lifestyle methods like diet and exercise effect 90-95 percent of cancer. Not to mention a far lesser burden on national healthcare.

Prevention starts with one small step.

To make that choice simple for the all important initial 30 days, The American Institute for Cancer Research finds trying a stair-step approach can be helpful. 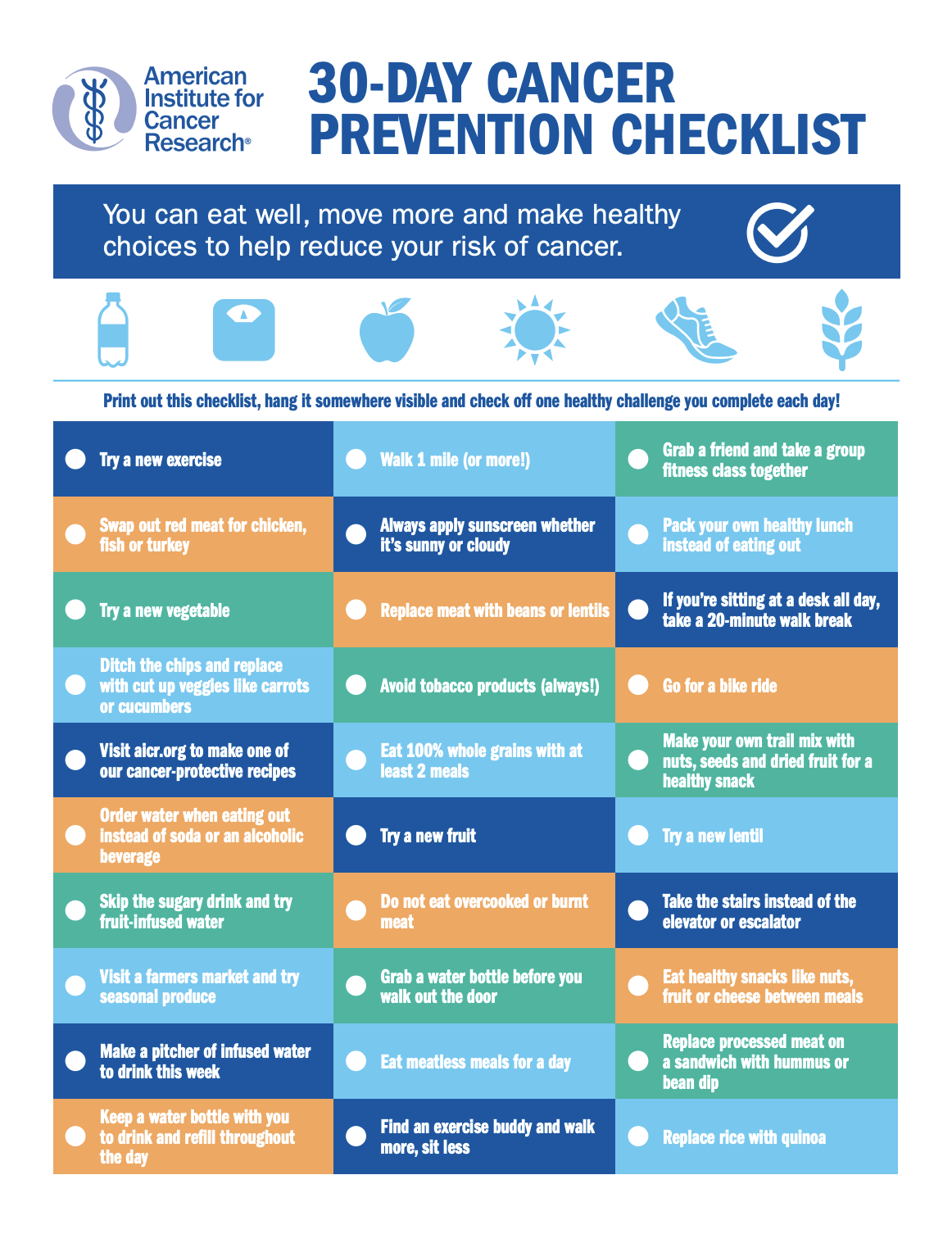 Opting for the number one cancer prevention dietary lifestyle, a plant-based diet, could begin simply by swapping legumes or beans for meat a few times a week or making colorful produce some part of every meal and snack. For this to happen, we will need PSAs as clear and impactful as the ones run against Tobacco. High risk food groups should be banned from TV advertising, taxed and labeled as such.

While we are waiting for this to happen, for most people, though, learning about nutrition takes time. That’s why WeTheTrillions makes clinical prevention easy. With the help of clinicians and evidence-based studies, WeTheTrillions makes and delivers delicious customized meals and snacks you can use in conjunction with functional medical support.

Take the 2-minute WeTheTrillions free assessment quiz to get started.

Receive the latest research, offers, and events near you:

WeTheTrillions. Public Benefit corporation, based in San Francisco, CA. All Rights Reserved.
Terms & Conditions
Privacy Policy
WeTheTrillions Services are exclusively intended for wellness purposes. Substantial scientific research has established the positive impact of the ingredient combinations we use and recommend, however, our service does not guarantee results if other lifestyle changes are not integrated. The meals and support we offer are not intended to help treat or diagnose disease, or to substitute for physician’s consultation. All data provided is protected, and not stored or used except to offer more customized service to users. For more information, please visit our Privacy Policy page.